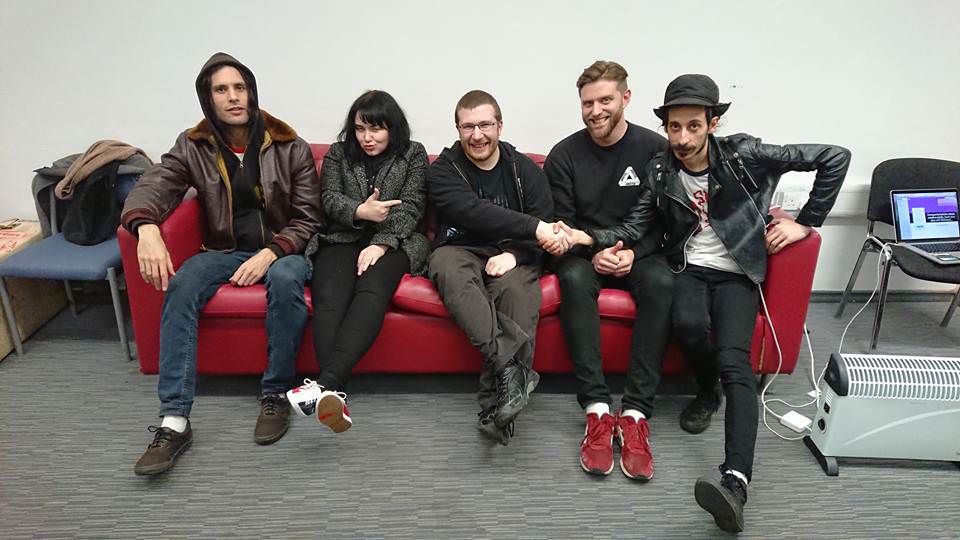 Before the first show of their headline tour in Manchester, our writer, Mick Birchall sat down with all four members of Turbowolf for a bit of a chat. Talking life on the road & making new music.

It’s release day of the new album, The Free Life and the first day of the headline tour. What are you most excited to start playing live?
Lianna: Cheap Magic!! I like it. I’m also really getting into Blackhole. I love the time signature on that one.
Chris: Yeah, Cheap Magic for me really.

What would you say is the biggest difference between this album and the first two albums?
Chris: Well… new songs, that’s always a nice start. I think it’s a good in between album, it’s a good mixture of the first two albums. The process was similar in some ways and different in others. Andy and I took on more of the production roles on this one and did a lot more of the recording ourselves as well, as in almost all of it. So that was quite different as we had more creative control.

How did it feel taking over that production role. As opposed to having a producer?
Chris: It was really good because we have a clear idea of what we want to sound like and having anyone else involved can often be a bit tricky because it’s like a barrier you have to get through to get to the place you want to be. So this way we could just do it ourselves.
Andy: Well, we sort of produced the others as well but they were engineered by someone else. Now on this one we could literally do it ourselves.

You have said that wanted to break the rules of music when making this record. What do you exactly mean by that and how did that affect the creative process?
Chris: Well from day one we wanted to try and not be like anyone else. I think from the start we had a very clear vision that we wanted to do something new in rock music.
Andy: It was all about trying to find our own little space in the music world. So maybe not so much “breaking the rules” but ignoring them. That way anything that sounds good went into the song and we didn’t worry too much about the specifics. If it felt right, that’s the way we went.

Speaking of new music, are there any new bands you guys are into at the moment?
Andy: Deerhoof, you need to get into them.
Lianna: Idles. They’re pals of ours from Bristol and they’ve been around for a long time but it’s only in the recent year, that they’ve caught people’s hearts, minds and ears.
Blake: I was going to say Idles as well, so let’s say Idles.
Andy: Lumpy & The Dumpers, their EP is called something like Those Pickled Fuckers. Truly brilliant.

And I immediately have more music to add to my playlist. Moving on to be a little bit more serious. What are the biggest lessons learned over the years?
Andy: Don’t be in a band!
Lianna: Yeah, learn how to pour pints instead. Learn how to pour and learn how to drink them. That’s how you make it in the music industry
Chris: I think to be slightly more serious. Learn how to do as as possible yourself and do as much as you can. Things that we’ve learned, we’ve learned everything, we started off a bunch of idiots. Now we’re here, third album and a headline tour. Learn everything you can about your craft and keep at it.

What’s the one thing you hate about touring and the music industry in general?
Lianna: To be honest, I really love it. I suppose if you’ve been away for a long time, when you start to miss people, pets and missing that home comfort.
Blake: I don’t think it’s as much leaving home, and yeah, obviously I miss everyone when we’re on tour. It’s when I get back and I struggle to get back into home life. That’s what I find difficult sometimes.
Andy: I hate it when people are mean. You know, you drive for ten hours and you turn up and then people are mean to you. All I think is “Well, fuck you then!”. Just be nice, there’s no need for it.
Chris: I think the stop, start nature of the job. There can be nothing to do then suddenly there’s loads to do. You’re told to move and then you’re told to wait around. Just annoying more than anything.

I think just to end on. What is the hardest thing you’ve had to overcome?
Lianna: Mental illness and death! I think that’s the hardest thing anyone has to overcome.
Blake: Chocolate and crisp addiction, and I’m still struggling.
Chris: I guess, self doubt it stops you from doing what you want do. If you can overcome that self doubt in your life then a lot of other things fall into place a little easier.