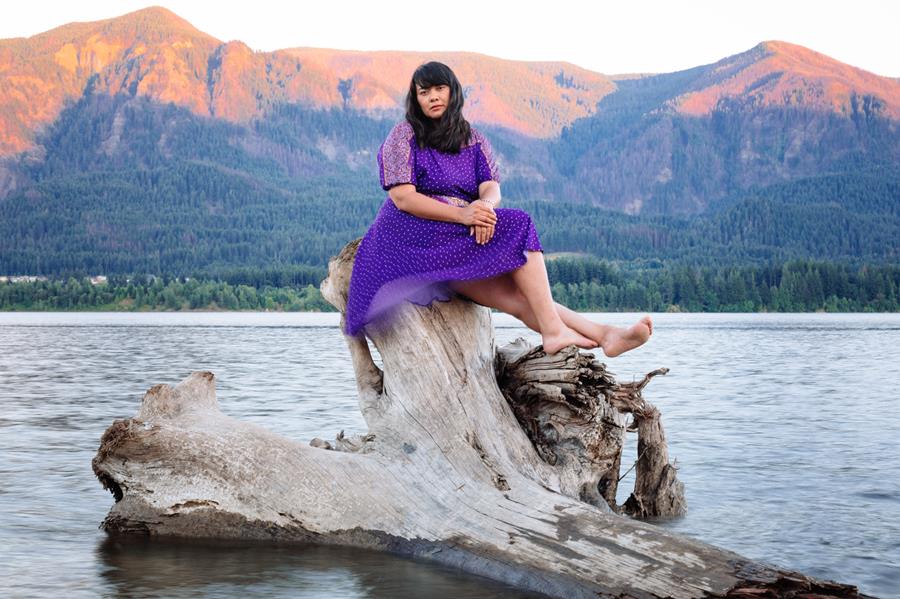 “The rusted guitar is the anxiety writhing in the pit of her stomach, her pleasant voice the rehearsed smile she’s forced to give.” — Pitchfork

“…sprawling six-minute offering of crunchy guitars and delicate yet emotive vocals that builds into an explosive finish.” — DIY Magazine

Black Belt Eagle Scout (aka Portland-based Katherine Paul) is an indigenous queer musician whose debut album, Mother of My Children, is about “grief and love for people, but also about being a native person in what is the United States today.” Mother of My Children is out September 14th via Saddle Creek. After sharing lead single, “Soft Stud,” Black Belt Eagle Scout now presents “Just Lie Down.”

“I started working on the guitar line for this song at the end of a five year stay at a big duplex I was renting in Portland. This had been the longest period of time I had ever lived anywhere that wasn’t my parents’ home. I was being kicked out of the place because the landlord wanted to renovate and hike up the rent. This was the case for a lot of Portlanders at that time (and still is) as the city was on a steep course of gentrification.

My life shifted and I ended up moving in with people I had never met to a smaller, but comfy situation in a different part of town. There was a Corgi named Dayton involved. The room in this house is where I worked on the majority of the songs for Mother of My Children, staying up late and turning up my guitar amp volume when I could. I was in a new place and the feeling of ‘home’ was never really present when I lived there. It was a really disconnected time in my life thus warranting the initial bits and pieces of ‘Just Lie Down.’

So many things didn’t feel foundational and at times I felt like I was losing it. I remember thinking, ‘You aren’t yourself right now. What is wrong with you? Why are you acting like this? What even is this?’ and that’s where most of the questioning lyrics in the song came from. I like to find some sort of resolution in my songs be it a feeling I get from playing it, a certain part of the song that has lyrics that reflect it, something. My resolution in this song is when I sing the lyrics, ‘Just lie down, head on the ground, sky looks blue, just like you.’ To me, it was a simple poem you could say to yourself that means even though you are sad, even though there seems like there is no hope, look up and see what is above you. The sky is still blue and beautiful. Hopefully you will see that beauty and move forward.”

Paul grew up in a small Indian reservation, the Swinomish Indian Tribal Community, surrounded by family focused on native drumming, singing, and arts. From an early age, Paul was singing and dancing at powwows with one of her strongest memories at her family’s own powwow, called the All My Relations Powwow. Paul reminisces, “When I was younger, my only form of music was through the songs my ancestors taught the generations of my family. Singing in our language is a spiritual process and it carries on through me in how I create music today.” With the support of her family and a handful of bootleg Hole and Nirvana VHS tapes, Paul taught herself how to play guitar and drums as a teenager. In 2007, she moved to Portland, Oregon to attend college and get involved with the Rock’n’Roll Camp for Girls eventually diving deep into the city’s music scene playing guitar and drums in bands while evolving her artistry into what would later become Black Belt Eagle Scout.

Mother of My Children is a life chapter gently preserved. The access listeners have to such vulnerability feels special and generous.

Pre-order Mother of My Children:
https://BBES.lnk.to/MOMC

Weshootmusic5 days ago
We would really appreciate subscribers to our YouTube channel. Most future gigs will also have a video gallery.

WESHOOTMUSIC TV - YouTube
Weshootmusic.com shares the finest Concert photos as a Video Slideshow.Subscribe to not miss a gallery of a show we cover....
youtube.com
View on Facebook

Beyond Salvation - Dead Behind the Eyes.......featuring Hellfest 2019 Photo Gallery
A photo gallery by Philip Goddard taken at Hellfest Open Air in 2019 ( including Knotfest ) for HeavyMag featuring the music of Beyond Salvation.All images a...
youtube.com
1    View on Facebook